RSS
← Where is the Justice?: Defaming the Dead
Now Enough Is Too Much: Defaming The Dead →

Will The Real Michael Brown Please Stand Up: Defaming A Decedent

Michael Brown of Ferguson, Missouri, died on August 9, 2014, although he is no longer here his family and friends will celebrate having known him. Michael Brown’s legacy is yet determined, as he no longer has a say in shaping it or know who will gain from any contributions he may have made.

“ The life and legacy of the deceased lies in the memory of the living.”

For anyone to see what your body looks like head to toe from any angle requires many photographers circling you in many patterns of 360 degrees. Each would have to simultaneously capture that moment-in-time.  The photos produced would only mark a small space of time in your life.  The photographer at your 10 o’clock may produce a photo that shows your left as a body with a symmetry our society touts as “perfect”.  The photo from your 2 o’clock right may show a bulge considered a “flaw” by society’s standards.  Whether perfect or flawed the resulting images will offer only a glimpse of an action or a viewer’s perception of the models’ thought transformed into action.

“Al Tompkins, a senior faculty member at the Poynter Institute, a non-profit school for journalism St. Petersburg, Fla., said in a statement posted on the school’s website that the hashtag campaign forces people and news organizations to re-examine how images are received and perceived.” 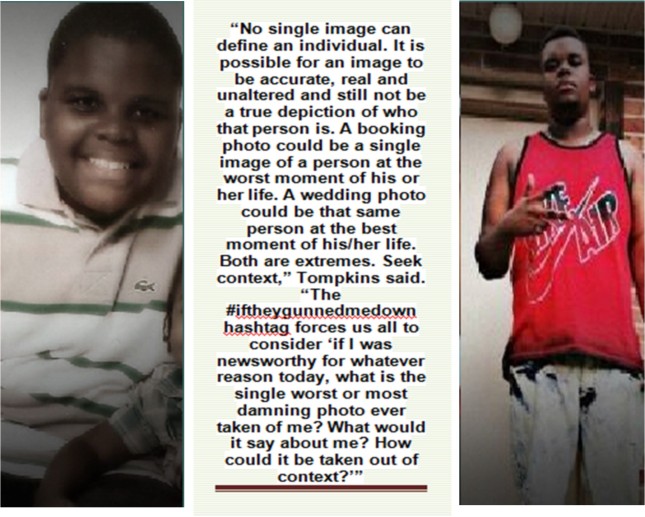 Adding one-dimensional or distorted photos to a story of the same nature delivers a caricature, than a reasonable representation of a whole person. When presented out of context with ill-intent, at its worst it becomes slanderous. Sites which boast as encyclopedia services, providers of Media content for publishing and who take it on themselves to present their information as objective and factual have a duty. Their duty is to ensure it is just that, particularly when recounting stories about the deceased.

It is not against the law to slander the dead. Currently there is no law in the United States, which responds to complaints of defaming the deceased. Defamation so egregious it steals from their legacy.  Defamation of a decedent so bad that it undermines the well-being of their survivors “who have to bear the brunt of possible character assassination due to familial ties with the defamed decedent?”   Survivors may experience a decline in their revenue or social status or is cause to suffer psycho-physiology damage due to that defamation.”

No law is a magic pill offering treatment for all our ills. If that were the case murder, defrauding the elderly and abuse crimes would not happen, because people would heed the laws’ built-in warnings of punishment by imprisonment or loss of money.   Regardless to its’ non-existent magical properties; it is better to have a law that can address a specific offense than not.

Egregious defamation, defamation with malicious intent or defamation due to negligence occurs through spoken and written words or images when used with indifference and disrespect or intent to do harm. It gives a false or deliberately inaccurate perception of the persons or events involved.

Compare a legacy to a tree or an evolving story.   The details of Michael Brown’s life and most notably his death continues to unfold with parts sparingly provided, but his legacy already bears the burden of defamation through negligent reports of some and by malicious design of others.   Whether Michael Brown’s family or Estate, or another’s would have need and use a law which makes it illegal to slander the dead is a negative statement, because no such law exists.

Contact your U. S. Senators  Ask them to endorse the Initiative:

Contact the  President  Ask him to endorse the Initiative.

Contact family &friends.  Ask them to do the same.

Notice:  No photos shown here are the property of AdLLaw.  They may be found on the internet under free source sites.

“Darren Wilson, the Ferguson, Mo., police officer whose fatal shooting of Michael Brown touched off more than a week of demonstrations, suffered severe facial injuries, including an orbital (eye socket) fracture, and was nearly beaten unconscious by Brown moments before firing his gun, a source close to the department’s top brass told FoxNews.com.”

There is no law against slandering the dead, but there should be.  There should be a law to address serious slander of Michael Brown right now.  A Law for you, me and Darren Wilson in the future.

Dedicated to:  Eugene Taylor.  Gone, but not forgotten

← Where is the Justice?: Defaming the Dead
Now Enough Is Too Much: Defaming The Dead →

One response to “Will The Real Michael Brown Please Stand Up: Defaming A Decedent”